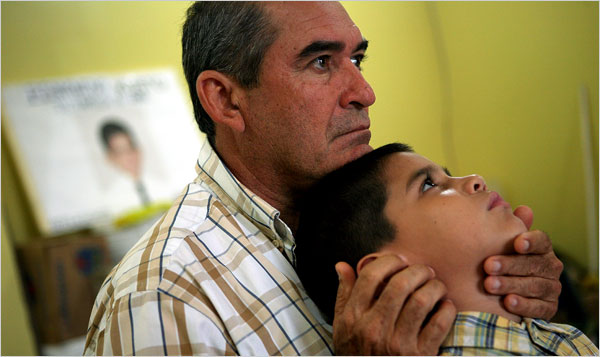 Stretching over vast cattle estates at the foothills of the Andes, Barinas is known for two things: as the bastion of the family of President Hugo Chávez and as the setting for a terrifying surge in abductions, making it a contender for Latin America’s most likely place to get kidnapped.

An intensifying nationwide crime wave over the past decade has pushed the kidnapping rate in Venezuela past Colombia’s and Mexico’s, with about 2 abductions per 100,000 inhabitants, according to the Interior Ministry.

But nowhere in Venezuela comes close in abductions to Barinas, with 7.2 kidnappings per 100,000 inhabitants, as armed gangs thrive off the disarray here while Mr. Chávez’s family tightens its grip on the state. Seizures of cattle ranches and crumbling infrastructure also contribute to the sense of low-intensity chaos.

Barinas offers a unique microcosm of Mr. Chávez’s rule. Many poor residents still revere the president, born here into poverty in 1954. But polarization in Barinas is growing more severe, with others chafing at his newly prosperous parents and siblings, who have governed the state since the 1990s. While Barinas is a laboratory for projects like land reform, urgent problems like violent crime go unmentioned in the many billboards here extolling the Chávez family’s ascendancy.

“This is what anarchy looks like, at least the type of anarchy where the family of Chávez accumulates wealth and power as the rest of us fear for our lives,” said Ángel Santamaría, 57, a cattleman in the town of Nueva Bolivia whose son, Kusto, 8, was kidnapped while walking to school in May. He was held for 29 days, until Mr. Santamaría gathered a small ransom to free him.

The governor of Barinas, Adán Chávez, the president’s eldest brother and a former ambassador to Cuba, said this month that many of the kidnappings might have been a result of destabilization efforts by the opposition or so-called self-kidnappings: orchestrated abductions to reveal weaknesses among security forces, or to extort money from one’s own family.

“With each day that passes,” the governor said recently, “Barinas is safer than before.”

Through a spokeswoman, he declined to be interviewed.

In an election last year marred by accusations of fraud, Adán Chávez succeeded his own father, Hugo de los Reyes Chávez, a former schoolteacher who had governed Barinas for a decade with the president’s brother, Argenis, the former secretary of state in Barinas.

Another brother, Aníbal, is mayor of nearby Sabaneta, and another brother, Adelis, is a top banker at Banco Sofitasa, which does business with Adán’s government. Yet another brother, Narciso, was put in charge of cooperation projects with Cuba. The president’s cousin Asdrúbal holds a top post at the national oil company.

Politicians once loyal to the president who have broken with him and his family here contend that Mr. Chávez’s family has amassed wealth and landholdings through a series of deals carried out by front men.

One opposition leader, Wilmer Azuaje, detailed to prosecutors and legislators what he said was more than $20 million in illegal gains by the family since the president’s father was elected governor in 1998. But in a brief review of those claims, National Assembly, under the control of Chávez loyalists, cleared the family of charges of illicit enrichment.

“In the meantime, while the family wraps itself in the rhetoric of socialism, we are descending into a neo-capitalist chaos where all that matters is money,” said Alberto Santelíz, the publisher of La Prensa, a small opposition newspaper.

One reason for the rise in kidnappings is the injection of oil money into the local economy, with some families reaping quick fortunes because of ties to large infrastructure projects.

A new soccer stadium, built under the supervision of Adelis Chávez’s at a cost of more than $50 million, is still unfinished two years after its first game in 2007, joining other white elephants dotting Barinas’s landscape. Nearby lies the unfinished Museum of the Plains, intended to celebrate the culture of the president’s birthplace. A sprawling shopping mall stands half-completed after its backers fled a shakedown by construction unions.

More than a decade into the Chávez family’s rule in Barinas, the state remains Venezuela’s poorest, with average monthly household income of about $800, according to the National Statistics Institute. Kidnapping, once feared only by the wealthy, has spread in Barinas to include the poor. In one case this year of a 3-year-old girl kidnapped in the slum of Mi Jardín, the abductor, when told that the only thing of value owned by the girl’s mother was a refrigerator, instructed her to sell it to pay the ransom.

“With impunity rampant in Barinas, how can our governor say with a straight face that people are kidnapping themselves?” asked Lucy Montoya, 38, a hardware store owner whose sister, Doris, a 41-year-old mother of three, was kidnapped in March.

Doris Montoya’s abductors have not freed her or communicated with her family since receiving ransom money in May, Lucy Montoya said, adding, “The government’s handling of this crisis is an affront to our dignity as human beings.”

Meanwhile, new figures show kidnappings climbing to 454 known cases in the first six months of 2009, including about 66 in Barinas, compared with a nationwide 2008 estimate of between 537 and 612. But officials acknowledge that the true figures are probably higher because many cases are never reported.

Here in Barinas, victims seethe over the inaction of the president and his family. “Our ruling dynasty is effectively telling us we are expendable,” said Rodolfo Peña, 38, a businessman who was abducted here last year. “The only other plausible theory,” he said, “is that they are too inebriated by power to notice the emergency at their feet.”
Written by the NYtimes, Merci à William pour l'info!