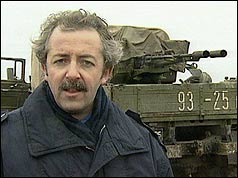 As reported by major UK newspapers, including The Guardian, The Times, Daily Telegraph, Independent and Daily Mail as well as by the BBC itself, the BBC Trust, which oversees complaints to the British state broadcaster, has ruled that Bowen's coverage of Israel in an article on the BBC's Web site and a radio broadcast was partially inaccurate and that aspects of the Internet article lacked impartiality.

In a piece Bowen wrote for the BBC website last June under the headline "Six days that changed the Middle East," about the Six Day War, which was criticized at the time by HonestReporting UK, Bowen referred to "Zionism's innate instinct to push out the frontier". He also wrote that Israel showed a "defiance of everyone's interpretation of international law except its own" and that its generals felt that they were dealing with "unfinished business", left over from the 1948 War of Independence. These references were deemed inaccurate or lacking impartiality by the BBC Trust:

"Readers might come away from the article thinking that the interpretation offered was the only sensible view of the war," it said. "It was not necessary for equal space to be given to the other arguments, but ... the existence of alternative theses should have been more clearly signposted."

The second finding related to a broadcast Bowen delivered on From Our Own Correspondent on BBC Radio 4 in January 2008, in which Bowen said the US government considered the Israeli town of Har Homa on the outskirts of Jerusalem as illegal.

The committee found the assertion was inadequately sourced: "The Middle East Editor had stated his professional view without qualification or explanation, and that the lack of precision in his language had rendered the statement inaccurate." It ruled the report had partially breached accuracy guidelines.

BOWEN: A HISTORY OF BIAS

The BBC appointed Jeremy Bowen to the newly-created role of Middle East Editor in June 2005 "to enhance our audience's understanding of the Middle East; and to provide extra commentary, focus and analysis to an increasingly complex area of the world."

We believed that Jeremy Bowen, instead of being a solution to the BBC's problematic reporting, would become a major part of the problem - a view confirmed by the fact that no other journalist has so consistently featured in HonestReporting and its UK affiliate's critiques over the years.

In an attempt to minimize the seriousness of the BBC Trust findings, the BBC spokesman said: "This is a single, partially upheld finding, related to one piece of output about events that took place over 40 years ago, and our Middle East editor was simply exercising his professional judgment on history. Clearly there is no consensus view of history and it is self evident that there are others who have different analysis - which of course they are entitled to."

The findings of the BBC Trust in response to two similar but separate complaints filed by Jonathan Turner and CAMERA (which can be viewed in full here in PDF format), have prompted calls for Bowen's dismissal. However, the BBC Trust report is only the tip of a very large iceberg. The reality is that this is only the latest in a long history of anti-Israel bias on the part of both Bowen individually and BBC News.

Here is but a small selection of Bowen's litany of bias in recent years:

HonestReporting has produced a number of long-term analyses of the BBC, the most recent from March 2009, comprehensively detailing major problems with the BBC's output. As Middle East editor, Jeremy Bowen bears a great deal of responsibility for this.

"Our assessment is that, apart from individual lapses, there was little to suggest deliberate or systematic bias. On the contrary, there was evidence of a commitment to be fair, accurate and impartial. There is high quality reporting from location, some outstanding current affairs programs and the Web site provides much valuable historical and other context."

Perhaps the greatest endorsement of the BBC Trust's findings is the reaction of notorious anti-Israel polemicist Robert Fisk, who describes the report in The Independent as "pusillanimous, cowardly, outrageous, factually wrong and ethically dishonest." Fisk goes on to say:

The trust – how I love that word which so dishonours everything about the BBC – has collapsed, in the most shameful way, against the usual Israeli lobbyists who have claimed – against all the facts – that Bowen was wrong to tell the truth.

HonestReporting has long-argued against this perverted notion that media organizations and critics of Israel are being silenced and beaten into submission by an "Israel Lobby". Fisk employs this smokescreen, employing the term "Israel Lobby" to cover up and distract attention from the genuine issue at hand. Indeed, perhaps Fisk would like to consider the fact that the complainant to the BBC Trust was an individual British lawyer who persevered, refusing to accept the delays, obfuscation and stalling tactics of the BBC complaints procedure until he achieved a result.

While this individual is a member of the UK's Zionist Federation, his efforts were made as an individual and not as part of some organized "lobby". HonestReporting's model is also based on encouraging the efforts of you - the grassroots - who can and do make a difference in addressing media bias.

Several years ago, the BBC conducted its own investigation into whether the network held an anti-Israel bias. The result -- a report by senior news editor Malcolm Balen -- was a lengthy study that the corporation refuses to make public. In an ongoing legal battle to force the BBC to make the report public, the British House of Lords recently ruled against the BBC and sent the case back to the High Court. We hope the High Court will force the BBC to release its study into the public domain.

The BBC has made it clear that it will not, as of this time, take any sanctions against Jeremy Bowen. But the BBC's extraordinary efforts to keep the Balen Report hidden would seem to suggest that the BBC knows that there is a serious problem with its Mideast output.